What is TCM acupuncture?

Acupuncture is a fundamental part of Traditional Chinese Medicine (TCM) that has been practiced in China for thousands of years, in Japan since the 6th century, and even in Europe since the 17th century. Manual acupuncture is performed by inserting thin needles into one or more of over 300 defined and well-documented locations (acupoints) in the body. The insertion of the needles into these points, which affect different functions, allows the TCM acupuncturist to help restore the opposing aspects of the patients’ Qi, or essential energy, to balance. Qi is the fundamental concept of TCM, which “postulates that Qi is the basic substance that constitutes the universe. All objects in this universe are born of the transformation of Qi. Qi is neither abstract nor beyond sensation. It can be perceived through its various forms of existence” (Liu, 2009).

The two opposing aspects of Qi, Yin and Yang, are deeply interconnected in the following ways: 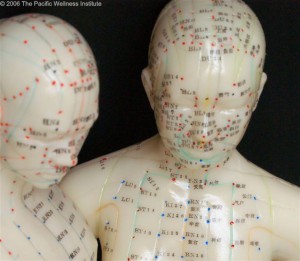 – Everything has two aspects, Yin and Yang

– Yin and Yang are relative to each other

– Yin and Yang are complementary opposites

– Yin and Yang create each other

– Yin and Yang control each other

TCM applies the philosophy of Yin and Yang to the structure, physiological functions, and pathological changes of the human body. Its aim is to attenuate symptoms and signs of illness and resolve the unbalance that causes them by balancing Yin and Yang to restore harmony.